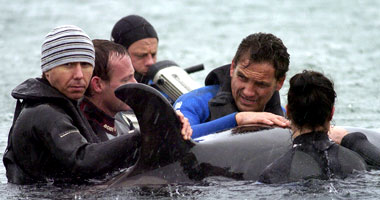 I received the call on Friday, just after midnight. There was an orca in trouble on the west coast of Auckland and more Project Jonah volunteers were urgently needed. The instructions were clear: be at the stranding site by 8am with all your gear, and await further instructions.

Mixed emotions of nerves and excitement ran through me. Falling back to sleep was difficult, as my mind raced through the list of things I’d need to do.  Would I remember everything from my training? Luckily I’d only completed the course a few months before.

Beating sunrise, I packed nearly everything needed for an excursion to the freezing Antarctic. A change of clothes, thermals, towels, extra food, drinking water, dive booties and my thick snow jacket… It was freezing, and I wanted to be prepared. I was already in my wetsuit, ready for action.

On the drive to Little Huia a hushed silence cloaked the hills. I wondered how many other whales and dolphins had stranded along this coast. A then horrifying thought … wasn’t the Manukau harbour once a breeding ground for Great White Sharks? I tried to push this thought from my mind.

Stopping at the local rangers office, I confirmed directions for the last few miles. I reached the site and made my way down to where a small team of rescuers were gathered. It was a sober atmosphere but my breath was taken away by the animal laid out before me: so powerful, yet so vulnerable and exposed. Regaining my composure, I checked in with DOC and was briefed. Then the work began.

The decision had been made to move the orca to the east coast. The huge swells and dangerous rips would make it difficult to refloat her from the west coast and the sandbanks and Manukau bar would create a myriad of problems for her once out at sea.

Preparation for the journey began. Our task was to keep our ‘charge’ wet and calm and to secure her on the trailer, ready for departure. After a final hose down and additional cushioning either side of her the command was given, and we were ready to go.

Leading the convoy, we reached Takapuna ahead of the team. We had lunch to refuel and waited for the others to arrive.

The trailer soon turned up, and with the worsening weather and a changing tide, we were quickly set to action. Marine boats were launched as a crowd of onlookers started to gather. We asked the public to keep quiet and roped off an area around the animal to create some space.

The trailer was reversed carefully into the water, allowing the orca to slowly adjust. Supported by the buoyancy of the water we were able to gently rock her from side to side. At first there was no response, but after a while the orca began to make high-pitched, audible sounds. Although weak, the calls varied in tones and length. For the second time that day, I was lost for words.

The gentle rocking continued, and a few minutes later there was a slow motion from her tail. The rain beat down, and the rocking continued. My entire body was numb with cold. Occasional signs from the orca, a slight bob of the head or movement of the tail, gave us encouragement and urged us on.

Once ready for release, we turned the orca out to sea. On DOC’s command we let go. She moved uncertainly forward, appearing dazed and confused. But after just a few moments, she seemed to find her feet and I watched in amazement as she made her way out to sea.

When did you do your Project Jonah training?
”Late last year in December 2007”.

When was your first stranding?
”4 July 2008. A juvenile orca stranded on Auckland’s west coast during heavy storms. I didn’t think I’d get the chance to put my training into practice so quickly – but it was great to know I had the skills to help and that I’d be able to make a positive difference.”

What was the experience like?
“Surreal. It’s hard to explain. These animals are so huge and powerful – yet when they strand they’re so vulnerable and exposed. They’re mammals, and in many ways they’re just like us. When you look into the eyes of a whale, it’s hard not to connect. It’s almost like they’re pleading for help. They panic when you leave them alone. In some strange way I think they know that we’re trying to help.”

How did you feel afterwards?
“Exhausted but elated. A real mix of emotion. It’s hard to put it into words.”

What made you want to do the training?
“I love the ocean and marine life and thought learning how to save whales would be a fun thing to do. The reality is that it’s hard work and emotionally and physically draining. But the upside is that you get close to these amazing animals, and have the chance to help them. These animals face so many threats; a lot of them are caused by humans. It’s nice that we can do something positive and help them when they need it the most.”

Why’s Project Jonah so great?
“They’re a grass roots organisation and genuinely care about marine mammals. They want to share their knowledge and skills and give people a tangible way to take part. They’re passionate about what they do, but they also have a really practical approach. They want to include – not exclude people, and help New Zealanders make a difference.”

How did you hear about Project Jonah?
They’ve been around for a long time – they’re just one of those organisations you know about. Over the years I’ve seen them run training courses down at the beach. They have a life size inflatable whale which looks incredibly lifelike. Like other people, I thought there had actually been a stranding – and rushed to help. I felt a bit stupid when I realised it was a plastic whale!