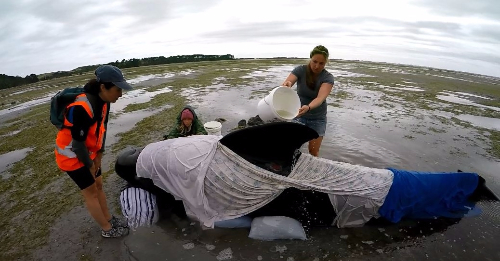 I trained in Nelson (where I live) last year and had not been to a stranding prior to this one. After receiving the text messages and heading over to Triangle Flat on Friday 13th, I arrived in time to catch the last bus ride out to the end of the spit after the initial stranding.  Along with about 4 other Project Jonah volunteers, we arrived too late for that day but headed out into the water just as the whales were being released.

It was sobering walking out to the release area, through all the other whales that didn’t make it. I had not seen whales in that condition before, with sun blistering and burns, still lolling about in the water as if they still had life.  It was interesting to see these amazing creatures up close but also heart breaking to see how many were already beyond help, and just how far they were spread over kilometres of the spit.  There didn’t seem to be any order to where they lay.

I stayed at Triangle Flat that night, in my tent and didn’t get any sleep after being told that the likelihood of a re-stranding was high. Then the text message came before midnight, asking us to be ready at 5.30am. Just knowing they were out there alone and in distress was enough to keep me awake until the dawn started to break.

The comings and goings during that night, with people arriving all through the night to be ready to help at first light was interesting. I was amazed at how many people were pouring into the area, ready to lend a hand. The atmosphere was somewhat upbeat and the energy levels and anticipation was high”.

Waiting for the Department of Conservation rangers to give the OK to enter the beach and head out at 6am was exciting. Not knowing what to expect kept energy levels high despite lack of sleep the night before.

I was impressed to see how many ‘high-vis’ had arrived overnight and were ready to go first thing. Amazing to think how far some of these people had travelled and how ready they were to help – a group of people united over a single goal.

Heading out to the whales I felt positive and eager to help wherever was needed. I was not prepared for what we found once out there. You could absolutely sense the mood and energy in the whales and how distressed they were. The whale calves still able to swim and crying constantly for their mothers was heartbreaking, but to see that life still in them was also encouraging.

At one point I stopped for a breather and looked around me. I’m not sure if that was a mistake or not, but the enormity of what we were trying to achieve without the man-power and numbers needed, struck me hard. I felt a little overwhelmed and very emotional, but seeing the volunteers doing their absolute best wherever they could was amazing.
Those first 2 hours spent righting as many whales as possible and propping up these huge mammals who weigh so much more than a human being was one of the most physically and emotionally demanding things I’ve ever done.

Looking back towards the beach at 8am and seeing members of the public beginning to arrive and be sent out to the area was amazing. Seeing seas of people arrive with nothing but the urge to help was such a relief and such a fantastic feeling. By this stage I was in charge of (and possibly a little in love with!) my beautiful whale who I had named Lucy. She was somewhat of a drama queen and had difficulty remaining calm and settled and was breathing erratically and thrashing her tail every now and then.  She needed sand bags to hold her in place and was constantly attempting to wriggle around.

I was amazed to see the change in Lucy over the course of the day.  How she was able to calm right down with gentle handing and gentle words.  I was equally amazed to see how different members of the public responded to her and quickly established a bond with her.
The time spent on the sand flats during the day ticked by calmly. I have made life-long friendships with the people who helped me with Lucy – the French, Dutch and Belgium tourists who gave up their day to be a part of something worthwhile”.

The shift in energy as the tide started coming back in was unexpected – both from the whales and from the volunteers. There was a real sense of heightened energy and anticipation. The whales became more vocal and more physical. You could tell they were excited to see the water again but also tense about still being stranded on the sand. Lucy got very vocal and started thrashing her tail once again. She seemed to be communicating with the whales around her which she hadn’t done all day.

Knowing that the high tide was not going to be high enough was very stressful. I was extremely worried that even by pushing Lucy onto her side once again, to slide her through the channels of water, was not going to be enough to move her. However with Yuin’s help in getting her over on that first push and realising that she accepted us doing it and worked with us so that we could push her towards the deeper water was such a relief. It became a very physical and emotional experience, 5 of us pushing her along on her side, and stopping every 20 seconds or so to let her breathe, not knowing if we would hit another sand bank or finally get to deeper water. We were one of the final whales to arrive at the release area and I was blown away by how trusting and accepting Lucy was. There is no question about the strength and force these whales could unleash, but Lucy just let us guide her gently to her family and waited with us until the signal to let go was given. Letting her go was easier than I expected it to be. It came with a sense of happiness and relief and excitement to see her swim freely. So amazing!”

Standing in amongst all those whales, feeling them swimming around me and feeling the sense of relief and happiness that they seemed ready and willing to head off together as a cohesive bunch was overwhelmingly wonderful.

What an incredible animal – to have such trust in us as humans to look after them in their time of need and lead them to the way out. They seem to be such intuitive, emotional and intelligent beings.

Being a part of this stranding experience has been life-changing for me. I spent a lot of those hours on the beach in the middle of the day pondering life and came away having made some life decisions of my own.
The experience has stayed with me to this day and I don’t think there is an hour that goes by that I don’t think about how profound and moving the whole experience was, and in a way, I miss those whales! I know they are free now and I’m so very grateful that we were able to get those 67 whales back to where they belong, but a part of my heart went with them and I miss them.

I am very grateful for the photos and video footage that has been passed around thanks to social media and email. It is fantastic to have a personal record of this experience, and while I do not wish that kind of distress on any living being, I know that I will be more than ready and waiting to respond next time if needed.