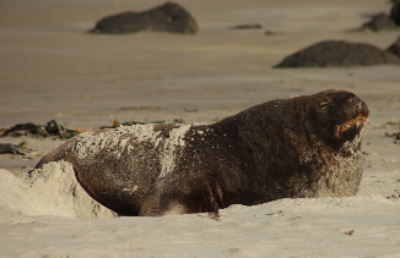 The New Zealand (NZ) sea lion is the rarest sea lion species in the world, and is endemic to New Zealand. Between 1998 and 2009 the number of pups born at the main colonies on the Auckland Islands fell by half, and the species was reclassified as nationally critical.

Whilst previously being found all around our coasts, only four breeding sites remain:

Today there are only around 12,000 NZ sea lions remaining. If the decline continues, the species is likely to become extinct within our lifetime.

There are two big threats to NZ sea lions, disease and commercial fishing.

The SQU6T squid fishery trawls in the same area as the main breeding population, and each year NZ sea lions are captured and killed. The squid fishing season also coincides with the NZ sea lion breeding and nursing period, meaning that the majority of females killed by the trawl nets around the Auckland Islands will have a dependent pup on shore and are often pregnant with next season’s pup.

Most commercial fishing vessels operating in areas frequented by sea lions are now fitted with SLEDs (sea lion exclusion devices), designed to allow sea lions to escape if trapped in nets. But there is concern that these devices simply eject dead or injured animals. This means that while we know for certain that 3 sea lions were caught by the SQU6T fleet in 2017, that number could be higher.

Despite having the same conservation status as kakapo, and being fully protected under the Marine Mammals Protection Act 1978, incidental captures during fisheries operations are not an offence as long as they are reported.

Several steps have been taken to try and halt the decline of NZ sea lions.

The Marine Mammal Sanctuary established around the Auckland Islands in 1995 stretches for 12 nautical miles and allows the government to implement fishing regulations in these areas. Added to in 2003 by an overlapping no-take marine reserve, this was a good start.

However, neither the marine reserve nor the marine mammal sanctuary covers the whole range of any NZ sea lion.

In 2018 a review began to determine whether the existing Campbell Island marine reserve, which only covers 39% of the Island’s territorial sea, should be extended to include the remaining 61%. This reserve prevents bottom trawling, Danish seining and dredging, practices which threaten NZ sea lions.

The full TMP can be read at https://www.doc.govt.nz/Documents/conservation/native-animals/marine-mammals/nz-sea-lion-tmp/nz-sea-lion-threat-management-plan.pdf

In addition, an official fishing-related mortality limit (FRML) for the squid trawling fleet has been set, currently at 38. If this number is reached, the Minister for Primary Industries may shut the fishery for that season. We believe this number is too high.

What you can do to help

We need to keep pressure on the government to ensure the NZ sea lion does not slip below the radar:

Postage is free! Just write ‘Freepost Parliament’ where the stamp would normally go.