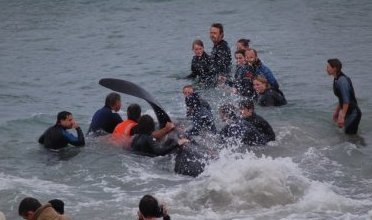 I received the text from Project Jonah at 7.30am asking me if I was available to attend a whale stranding in the Bay of Plenty region. My reply was automatic and I text back yes before even considering what the day had in store for me, or the whale.

As I waited for information on the location of the stranding I felt a mixture of emotions. Primarily excitement that I was going to get to help with the rescue of a marine mammal closely followed by an overwhelming feeling of sadness and empathy for the stranded animal I had not yet met.

I started to prepare myself in all the ways we had been taught on the course, packing a day bag full of water, food and sunscreen. Even though the sun was shining, I got quite carried away and started to prepare for the unexpected rainstorm with waterproofs and beanies also added! My mind started to scramble through all the things I had been taught through Project Jonah and also my own knowledge of whale anatomy. A few moments of anxiety; whether I was up to the job having never saved anything other than a plastic inflatable whale (Project Jonah’s training whale) were interrupted by a phone call from a friend who informed me that there was an orca on the beach right across the road from my house.

I couldn’t believe it. Firstly, how could this be? I was expecting a car journey to Whakatane or Maketu, not a walk over the dunes onto my local beach. Secondly of all the species it could have been stranded it was an orca which I have been passionate (actually obsessed) with all my life!

I grabbed my bag and my wetsuit and ran over the dunes. As soon as I saw Nobby and the digger on the beach surrounded by people, a feeling of utter compassion came over me. There was this huge whale completely out of his comfort zone lying shaking next to a large piece of working machinery and a group of onlookers.

I approached the group quite quietly initially as I knew I wanted to settle my own emotions and nerves first. I put my name forward for the water duty roster (teams of people were being asked to fetch water and bucket these carefully over the whale). I then let the DOC officer in charge know that I had completed the Project Jonah course in 2007.
The orca needed to be moved into an upright position and to do this I was aske to dig sand from underneath the animals right pectoral fin.

At this stage I think it’s fair to say my adrenaline had kicked in. I was always aware I was sitting next to a large whale and that he was moving, talking occasionally and obviously the noise of him breathing through his blowhole, but my main focus remained on the job I had been set.

I remembered the manner in which I was taught to conduct myself around the distressed whale and just got stuck into freeing his pectoral fin and lowering the angle of it. To be honest, other than those directly around me and the whale itself, I was oblivious to the huge crowds that had gathered to support and encourage Nobby.

I had no concept of time as I relentlessly tried to remove sand from around the fin and only stopped a couple of times to drink water. Before I knew it, a few hours had passed and the tide was starting to lap gently in around us. The look of relief that Nobby showed by opening his mouth a little for the fresh saltwater to run in will never leave me.
At this stage in the rescue I was relieved from freeing Nobby’s fin and asked if I would like to be part of the team that refloated him. I felt so excited and privileged as I started to become aware of how many people around us were eager to be part of this amazing rescue effort. I got ready and listened to DOC’s instructions. We would use the incoming tide to refloat Nobby. Our role would be to support Nobby and keep him upright.

As I took my place alongside Nobby, I felt a deep connection with him. To be near the front and be able to gently talk to and encourage him was an experience I will never be able to fully articulate. I could feel him working with us and the increasing swell to turn himself around and head back out to sea.

Supporting Nobby in the shallows was a huge team effort. We encouraged and supported each other as well as the whale. We slowly but surely were able to move Nobby into deeper water and finally the time came to let him go. I thought he might be off balance, but the efforts we had made to keep him upright on the beach in order to restore his equilibrium, seemed to have paid off as he was quick to go.

Standing well clear and giving him the space he needed, we all stood back and watched as he slapped his tail on the water’s surface. Gradually he picked up speed and within moments he had disappeared into the deep. The celebration from the crowd and from the team in the water was immediate.

For me it was a massive surge of emotion, no doubt emotion that had been suppressed all day. It was not until I saw Nobby swimming free away, that the reality of what I had just been a part of started to seep in. Three days on I am still reeling from the experience and feel like it was a life changing day.

Of course it is a massive sense of joy that a living thing has survived and the rescue was a success, but on a personal level, I feel like I have shared something special with an individual animal that desperately needed help. When Nobby swam off I felt a bit of myself going with him. I’m not someone that normal cries but I admit to shedding a tear or two over the past few days.

In the days following the rescue I have had time to reflect. One of the resounding thoughts I have is a sense of gratitude to Project Jonah. Despite the stranding being the first I’ve attended, I felt well prepared and confident that I had the skills needed to be of real help on the day.